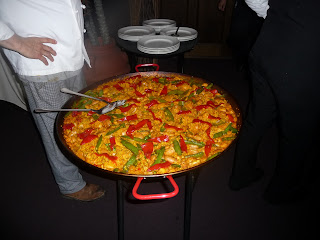 This past week has been a cornucopia of culinary delights!  It started with Memorial Day with a brisket and all the fixin's (as we say in Texas) alongside the pool with margaritas for them and Capt Morgan's for me.

Great time was had by all.

Tuesday was being taken off the freeways of Houston to the Eastside of downtown to a relatively new place called The Cajun Stop.  A young woman who survived Katrina has a place that serves everything from gator to crawfish to the best po-boys this side of the Atchafalaya Swamps!  I was delighted to be asked if I wanted to go there.  My preference would have been red beans and rice as I grew up on that in Louisiana but they weren't ready when we go there so my second choice was a roast beef and gravy po-boy which is seldom seen on a menu anywhere but in New Orleans or south Louisiana.  I was not disappointed!  At all.
The messiest sandwich I've eaten in years - at least a 10 piece paper towel lunch.  Yum-ee.  I wanted to try their bread pudding and a few other things but that will have to be for another day.  I was WAY too full to have anything else.

Wednesday night it was off the freeway near Sugarland to go to the closing party for the Houston Aeros hockey team which is moving to, of all places, Des Moines, Iowa.  I'm not kidding.  The party was at Tx Land and Cattle.  I had had lunch somewhere (oh yes, a sandwich from Neilsen's Deli) and so wasn't hungry at all.  My friend and I shared sliders and pecan pie.

Thursday was lunch at Gaicomo's - sage ravioli, to die for and then that night it was downtown Houston to go to Discovery Green to see Billy Joe Shaver. GREAT show. Discovery Green is such a welcoming, easy place to get to amidst the skyscrapers of Houston.  The big grassy areas, little man-made lake along with a raised knoll and covered stage make for a perfect venue for musical groups.  We took things to sit on and enjoyed being very close to the music and the people.   Dinner that night, light fare.  Chili cheese hot dog and lemonade.

As if all of that wasn't enough Friday morning I was out of bed early, dragging myself to get dressed and be at the Breakfast Klub for breakfast.  Have heard about this place for years.  Have heard about the line that starts forming before they even open in the mornings.  About  the delicious waffles and fried chicken.- one of their specialties.  It was all that and more.  No line luckily.  Great food - no I didn't have waffles and fried chicken.  Suffice to say that I had no need to eat another meal until lunch the following day.  Except that night I went to the Pour House for drinks and shared a very tiny cheese plate with my friend.

Cool breezes blowing in the evenings for the last few nights added to the delight of dining outside.  Mixology is big and booming in Houston.  Artisanal beers and unique mixed drinks with ingredients never before heard of add to the mystery and high prices.

The photo at the top of the post was from a wine dinner I went to a couple of weeks ago where one of the courses was paella.  A dish that I love.  Ironically just this time last year was the Paella Festival in San Miguel which I wrote about.  In talking to my son in San Miguel today, he said the Second Annual Festival yesterday was even bigger and better.  Great news.

I'm settling down for a few days of quiet.......well that's not true because I'm amidst teenagers - there is NO quiet.  But surely not as many meals and things to do.  That is til Tuesday and Wednesday when there will be another concert to go to.  Chip Taylor at the Mucky Duck along with lunch on Wednesday with my dear friends Amanda and Patrick at Charivari, my new favorite restaurant in Houston.  We'll all be sharing this meal with my  new friend, Bob.

One of the fun and enjoyable things about all these meals is that I'm connecting with old friends and catching up on their lives and activities.  I'm not eating any of these meals alone.

Home to San Miguel next Sunday where I'll be glad to sllllllllllllloooooooow down, I think, for a while at least.  I'm grateful for each and every thing that I have been able to experience on this trip to Texas!

What fun but after all that food, they would have to roll me on the plane. Glad you are having a good time. Any time for getting together before you leave?

Wow, Barbara, it sounds like you are having the time of your life. The San Miguel Paella Festival was yesterday? Shoot! I don't know how I missed that, I love paella. Although the afternoon on the rooftop patio at Hansen's was good too,LOL.

Sounds like an exhausting and fattening , and fun, couple of weeks.. You'll need a couple of laps around the Jardin to work it all off! LOL! Hope you have a safe trip home..
Dan in NC

Kay - doubtful, but possible. I have learned to like lotsa salads.

The other day after you left Frenchie's, Frankie and I sat and talked for nearly two hours So good to catch up with him and all his news.

Friday's cheese plate was at the Down House.

Sounds like some bountiful chow amiga - colorful too. Have fun!

Unknown - aka Bob corrected me and he is so correct, we were at the Down House which was the name of Darwin's home, if I remember correctly. The clever thing is they bring your bill in a book either by Darwin (I wasn't paying attention) or about Darwin.

Dan, I've tried to eat salads at times or not eaten all meals in order not to look like a blimp when I go home.......back to the gym when I get there, that's for sure!

I might have passed on the correction except that there is a new place named Local Pour [have not been there] and did not want anyone to be confused.

Unknown, I agree and had read about the new Pour House recently. Since it has a four letter name, I got confused. Plus Down House's name has NO zing..........

I cringe at the new names of restaurants in Houston. A few that come to mind. Oxheart, Underbelly, and one or two I can't remember - which is the point. THEY should be working with someone to come up with memorable names. It IS part of the important marketing strategy necessary when you have 14,000
competitors.....

Babs, Underbelly is putting Houston on the map! Who can forget that name? Snout to tail.......they use it all, local, hands on, inventive, and memorable. IN Houston.

Sorry Dana, Houston has been on the map in the culinary world since the 980's when John Mariana, food critic for Esquire and Wine Spectator, among others traveled here and marveled. It doesn't take a name like Underbelly to put Houston on the map.........