Listening Is an Act of Love 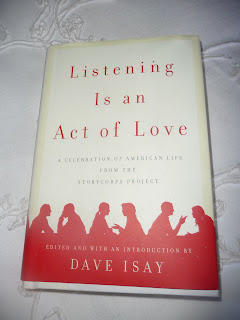 I brought this book back from Texas in March.  I finally got around to reading it in this past week.
I recommend it to every person who wants to read about the "everyday person" and their lives.

I don't know if someone gave me this book, or if I picked it up at Goodwill.  It was published in 2007.
I highly recommend it.

The StoryCorps was founded by Dave Isay in October 2003 with a simple recording booth in New York's Grand Central Terminal.  Studs Terkel, who was ninety-one at the time, flew in to  cut the ribbon to begin the process of facilitators or family members interviewing each other for approximately 40 minutes.  At completion of the interview, one tape is kept and sent to be stored for posterity at the American Folklife Center at the Library of Congress.  The other is given to the individual.

Tens of thousands of people, not only in NYC, but in many places throughout the USA have volunteered to be interviewed.  Traveling booths have been in many out of the way places.

To say that their stories are poignant and touching, would be an understatement.  One was by a man who became a steel worker and what his experiences were like, along with his pride, in his dangerous job.  Something that had I not read, I would never have known about.

Others were everyday people who lived through the Depression, World War II, the Holocaust,  9/11 and Hurricane Katrina, to name just a few.

Story Corps is one of the fastest growing nonprofits in the nation.  Excerpts from the interviews are broadcast on NPR radio's Morning Edition.

How wonderful that there is someone and someplace to celebrate the lives of the uncelebrated everyday citizen!

Shannon, if you want to borrow the book, you are most welcome!

Sounds like a wonderful concept. I love to hear everyday, normal , seemingly simple, otherwise overlooked stories of peopels lives. All of us have a story to tell, everyones story worth listening to as much as the next persons!

Oh so true. I'm just thrilled that these stories are being documented. I wish I had tape recorded my family members who have passed on. BIG regret!