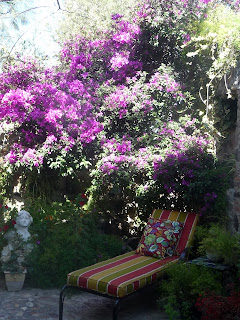 I had intended to write about the fact that in three weeks this bourganvilla went from not one bloom to this profusion of beauty.

But, then, I realized what today is - April 4th and memories flooded into my mind.  I didn't realize until the news was on tonight that it had been 45 years.

Forty five years ago this evening Martin Luther King was assassinated.  Where were you?
Do you remember?  Most people do.

My husband and I, who lived in Baton Rouge at the time, were on our way across the Mississippi River to pick up a cocker spaniel puppy for our three children.

We heard the announcement on the radio.  Stunned, when possible, we pulled over to the side of the road and just stared at each other.  How could it be?  Another death.  Who could understand that a man of peace, who was smeared by the FBI and other agencies, could be dead also.

We just had a hard time comprehending and understanding how this could keep happening.
JFK, Bobby and now Martin.

My husband was angry.  The beautiful thing of that is that he was raised in the South - in Mississippi.
Yet never in the sixteen years we were married did I ever hear a racial slur or unkind word said about someone with less then us or different then us.  I respected him so much for that beautiful part of his character.

We raised our children in the same way.  To be color blind and to hold up all those around us - equality and tolerance of differences.

Just today, my college age granddaughter took a stand about something that the Student Senate at Texas A&M has done.  I just smiled and thought to myself, I'm blessed to see these young people grow up with belief in equality and tolerance just as their parents and grandparents believed.

What a proud and cherished moment.

There IS hope that some day equality in all areas of life and tolerance of differences might occur.

The picture of your patio in bloom is so beautiful. Our snow has just melted and my Tulips are beginning to bud. I love Mexico. In May, I am visiting Ajijic for a few days and my daughter Sara in California. I cannot wait for the change in the weather. I love San Miguel, but I wanted to visit a place that I had not been before.

Mid-May til mid-June is the hottest time in Mexico until the summer rains come. This is our summer now.
Once the rains come we fall back to spring weather....Enjoy your time in Ajijic and California. Tulips have always been one of my favorite flowers

The actual image of the outdoor patio within blossom is really stunning. The snowfall offers simply dissolved as well as my personal Tulip glasses tend to be starting to marijuana. I really like South america. Within Might, I'm going to Ajijic for some times as well as my personal child Sara within Ca. We can't await the actual alter within the climate. I really like San Miguel, however I needed to go to a location which i was not prior to.