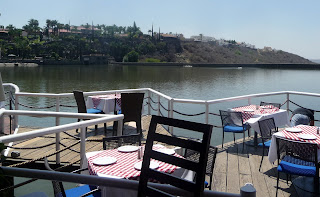 Last week prior to all the birthday doings, I traveled with the quilting group to see a new quilt shop in the suburb of Queretaro known as Juriquilla.  I had never been to a "quilt" shop so I didn't know what to expect.  Basically, it is a shop with fabrics to make quilts along with sewing machines to try out or to learn on.  Well, at least this little tiny shop was set up that way.

On the drive, I was absolutely astonished at all the development on the north side of the City of Queretaro where Juriquilla is located.  I probably have not driven over that way in a couple of years.

Luckily, since I was driving, some of the women had been over there in more recent times and could direct me through the various turns and on ramps.  YIKES. 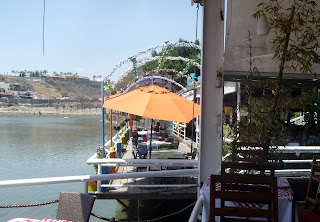 After our time at the quilt shop, we headed over to an area called La Nautique which is a presa (reservoir) that has lovely homes built around it along with about ten or so restaurants along one side.

We arrived early.  At noon.  Very few people eat lunch at that time other then gringos.  But, we
were able to eat at the Italian restaurant although some of the others had menus that were more intriguing.

It's somewhat surreal to know you're in almost the desert but as you're dining you're looking out on this body of water with white pelicans and other wildlife.  Really a pretty place. 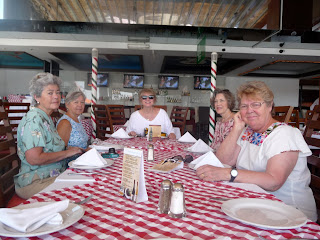 Since I"m new to the group it is fun, in a small setting, to find out more about these women.

One of the new members, such as myself, is Donnis.  In conversation we discovered that we
have several mutual friends.  She is from Austin and I so look forward to getting to know her better.

Several women in the group are here only part of the year.  They are from either the Northwest or from Canada.  It seems from conversation that they have plenty of time to quilt due to their inclement weather.  Here in San Miguel we have sunshine and mild temps nine months out of the year.

The hardest thing for me is to stay inside when the weather outside is so wonderful.

I'm having the same problem! It has been so beautiful here over the last few months that I am having trouble creating anything. Enjoyed you pictures.

My orthopedic specialist is just past Juriquilla and I go to see him about every 3 months. I swear that the skyline changes every trip. It is good to see such a booming economy in Queretaro.