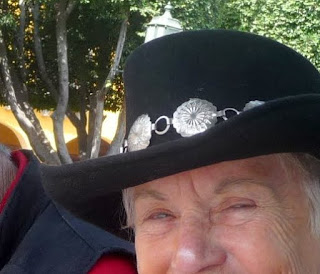 I took this lovely photo a couple of weeks ago of two of the most delightful people in San Miguel.  If you had to guess their ages, would you believe 86 and 87?  I certainly wouldn't.

I've known them since I moved to San Miguel.  Two of the most upbeat, positive individuals I've ever known.  Both are internationally acclaimed artists - Tom primarily as a sculptor of large site installed bronzes in zoos, parks all over the place.  In addition he is an artist, and so is Dorothy.  She as Dorothy Bell - he as Tom Knapp.  Look them up - you'll be amazed!

They have been here so long that I'can't remember how long it has been.  They have studios in their home here that are wonderful.

Since the two are getting up in years, not too long ago they signed their home here over to their son.
Now they discover that was a big mistake.

They can't prove the required new income requirements since they don't own property any more.  For the two of them it would be $3,600 a month!

They were supposed to ride to Texas with me next week.  They can't.  They can't get a renewal of their documents!

Isn't this ridiculous?  Somebody, somewhere better get busy and get this rectified before they hear the great "sucking sound" of expats leaving Mexico.

To add to the aggravation, the government is cracking down on mail services handling prescription drugs coming from the USA for retired expats and veterans.  Before, just a handling charge and 17% tax was charged - which was quite a bit.  Now, the mailing services can no longer handle the prescriptions, period.  Expats are scrambling to figure out what to do.    Most have Medicare prescription coverage so their costs are minimal.  It will be a hardship for many.

I don't mean to complain.  I just think everyone is surprised and shocked at the suddenness of this.  No warning. No chance to make future plans.  It is befudling to me why there was no advance notice.

Hopefully there will be a resolution in the near future.  However, having dealt with the Mexican court system for the last eighteen months in another matter, I can attest that nothing happens fast in Mexico!

Barbara...this is definitely going to have a major impact on many...I was shocked when the whole regs finally came out...so many ex-pats come down because they can live fairly well on their social security only...that will all change...to the detriment of the Mexican economy...this was not thought through well at all...very sad...

Yes, I am one of them. IF I couldn't rent out the guest house on this property, I would have to leave!

Thank you for your outstanding blog. I love reading your stories.

I would like to ask about receiving prescriptions from the US in Mexico. I spend most of the year in Oaxaca, the rest in Chicago. I have gotten caught without enough meds, for instance if I extend my stay. There is a way to have meds sent to me in Mexico? Please tell.

Hi Joan - Well, it used to be simple. We all use mail services with addresses in Laredo or wherever in the State. In the past, everyone (not me) had meds sent that way. NOW the govt is cracking down and you cannot ship prescription meds into Mexico without a form per shipment. You still would have to pay 17% duty plus your shipping cost. AND if any prescriptions are things like Ambien, a controlled substance now in Mx, it will be sent back to sender by Customs which inspects every prescription package.
Since I get my meds in Mx., I always bring enough to last for a couple extra weeks while in the USA.
The other thing is you can go to any farmacia in Mx. with your meds and find the equivalents here and buy over the counter. People have been doing that for decades. IF one is a controlled substance,there is usually a dr. officed in the farmacia that can write the prescription and then you can get the meds! Hope this helps.
Glad you enjoy the blog!

someone needs to ask our state senator, or someone who has contacts in DF, what exactly is the reason for all these changes. It seems like a solution to a non-existent problem or just petty anti-gringo sentiment.

Al, I read somewhere that these changes had been in the works in the Federal govt for a couple of years since they had not been update in 14 years, if I remember correctly. But, things are really, really out of whack. I don't think its anti-gringo sentiment, but overreaching........for more income for the country. A sad mistake, In my humble opinion.

Carol, go to your Mexican Consulate where you are going to get your visa, unless you are coming in on a tourist visa initially. You now cannot apply for a visa in Mexico but must do it prior to entering - a temporal or permanent visa, that is! They can tell you what the income requirement is or the cumulative amount in savings that is acceptable...........Things keep changing. Good luck. Renting is much less expensive then buying, although my son sells real estate and has places in the $100,000 - $1.4 million..........it depends on your wants.