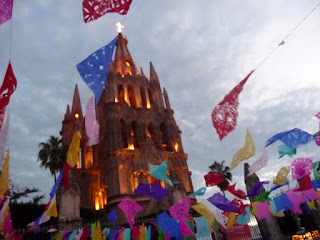 I was totally unprepared for all the people, fireworks, costumes, catrinas and mojigangas that I saw last evening. I had gone to a talk at the Bibliotecha and thought I would walk up to the jardin to see the finished altars.  I did.  I'll post those photos tomorrow. 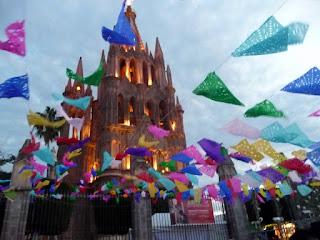 The breeze was blowing.  The sun was setting.  The papel picado was making a whispering sound that still could be heard over all the chatter by humans. There is  something about that stirring breeze and those floating colorful flags that mesmerize me.  I could have taken one hundred photos! 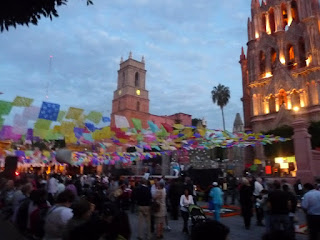 On the ground, people were coming in droves.  Some people waiting for the earth harp to play.  Some for the catrina parade.  Families were parading with all members dressed as catrinas - male and female. 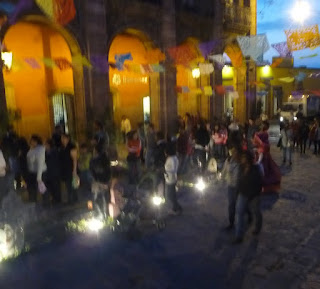 It began to become a little surreal. 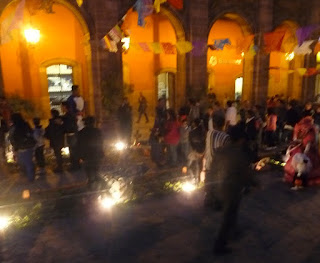 The darker it got, the more people that arrived. 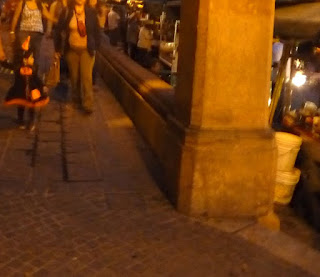 Fireworks were bursting overhead.  Not the pretty ones - loud ones. 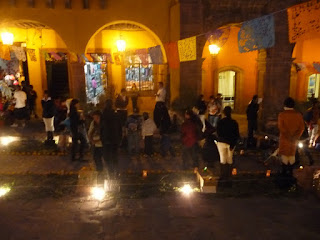 It wasn't long before the catrinas were there along with the parade with the mojigangas.  Those are big, big puppets around 10 ft high dressed to mimic and make fun of people. 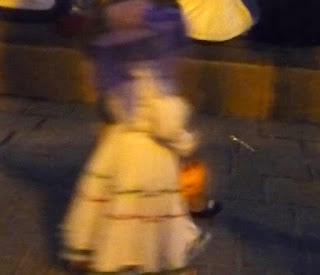 A party was underway.  What?  What happened to the reverance and solemn feeling of the cemetaries in Patzcuaro.  Where were the people who remember the spirits of the dead? Who were these people that were parading and promenading instead of being at home preparing for the cemetary today?

I found it very disconcerting.

I've traveled all over Mexico for Dia de Muertos.  Never have I seen anything like this..........And, it's not over yet.  More events tomorrow and Sunday.  Whew!  What next?

It looks like they're having fun in the Jardin - maybe a different bunch are remembering in the cemetary. Thanks for the photos.

Looks like a celebration of Zombies. Very different, for sure.

A Mexican friend in Melaque told me that over here on the beach Mexicans are getting far more comfortable with treating the day like Halloween -- more as a party than a remembrance. Even the booths the teenagers put together in the jardin had that feel.

These parades were all about people dressing as catrinas. Something that is done in other cities, but is new to San Miguel, I've been told. Hmmmm.
This is the first year I've seen children trick or treating too.
Steve, it is often the teenagers who do all the work on the altars for the various groups who want them. I thought your altars looked very traditional to the ones I've seen in Tlaxcala, Puebla, Patzcuaro, San Miguel and everywhere else. I had no sense of Halloween from them.