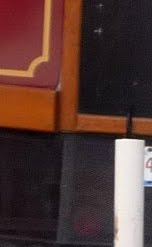 I tried to scurry down to centro on Friday.  Unfortunately I missed the children's parade prior to the big events going on all weekend.  I did see a mother leaving with her wee ones and one of the estrellas used in that parade.  Darn, why didn't I get there earlier?

My routine, if there is such a thing, is to spend an hour, at least, on Monday and Friday on the bench in the jardin just watching life go by.  This Friday lots of people were there and all were energized to prepare for all the excitement that would take place Friday, Saturday and Sunday.  Parades, fireworks, the Alborada, the Voladeros.  You name it, it would be like a three ring circus.  A beautiful three ring circus.

Even one of the men who is usually in the residential area selling dirt that is in the bags of the burros came right through centro and passed Allende's house where wreaths had been placed.  Never seen that before! 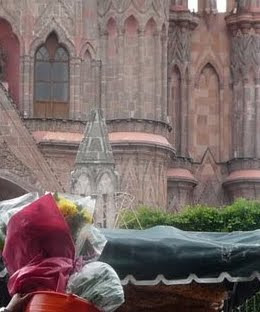 Next was the flower lady, in a hurry.  Always carrying the large bucket on her shoulder.  Trying to sell her flowers so she could move on to get more to sell, I presume.

I often wonder how many miles they walk in a day.  I'll see this woman at 9AM and still see her at 6PM walking in neighborhoods.  Always with flowers to sell.

It's just a little slice of life in Mexico.  The true slice - the one that works hard, day after day after day.