Leave it to me to have to renew my FM-3 and get caught in the whirlwind of immigration changes that are going on in Mexico!  Until the new laws go into effect on the 31st of October, some quasi laws are in effect.  I'm at the 5th renewal which requires you to get a whole new FM-3.  It didn't used to be a big deal.  After all I"ve been here eleven years, I've done this before.
Ahh, but this time is ALL different.  I had two choices - let it expire and pay a fine; or drive to the border and get a new one and then come back to San Miguel. Neither option set my heart on fire.
So although I've been a non-permanent immigrant resident for 11 years, NOW I'm becoming a permanent immigrant resident on an FM-2.
The funny thing is after October 31st there will be no more  FM-2s or FM-3s.  I'm just trying to go with the flow right now.  Get something and be done with it til next year.  I hope by then things will have settled down.
The reason I never got an FM-2 is that it constrains the amount of time you can be out of Mexico.  Plus you can only have a US plated car for the first five years that you have an FM-2. Hmmm, I was hoping the Pathfinder and I would go to the happy hunting grounds in the sky together.  Heck, even though its a 98 Pathfinder it still drives like a dream.  We'll see what happens at the end of the five years is my thinking right now.
In addition, the monthly income requirement for an FM-2 is substantially higher then for an FM-3.  So is the cost to get it initially. Close to 5000 pesos.  About $400 US.
One of the main reasons I went to an FM-2 is that my car permit, obtained eleven years ago automatically renews each year with my renewal of the FM status.  IF I had let the FM-3 expire, I would have had to go to the border now to get a new sticker plus pay more money at the border.
OY VEY, it was a mess. 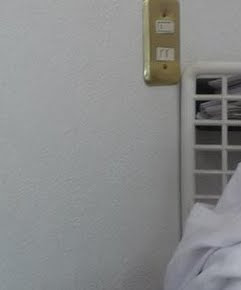 Today however, I plodded through the process with the trusty facilitator, Patty Garcia, and hopefully in another week, this too shall be a mere memory.  Patty is a delight and has assisted me each year.
Yes, I know I could go and do it all by myself but part of the joy of living in Mexico is maintaining those relationships that began when I first came.
Patty and I now joke when we see each other on the street.  Or I see her at Gringo Bingo and also know her mother.  That means more to me then the small amount that I pay her to help me.  Plus since this is her area of expertise, I've always believed in using people who are experts.  I'm certainly not when it comes to this kind of stuff.

I took these two photos this morning while the documents were being typed to be presented to Immigration.  In this office documents are typed, photos are taken, copies are made.  All in preparation to cross the street to immigration.

I love the bare bones efficiency.

There was even a good laugh at mid-point when the man typing the documents, Patty and I were conversing about what happens at the border.  I doubt either of them has been there.  The man was astounded when I told him that the Mexican customs man told me that my car permit did not have to be turned in each time I cross the border as some have been told.  We laughed about several other things that people in San Miguel are told, like getting a letter in Queretaro saying your car is covered by the permit.  I told him that the last time I crossed the border the Mexican customs man said that the people in San Miguel are the only people in all of Mexico that do that.  I told him I had never gotten the letter.  He was amazed.  I told him I had no trouble because I have "blue eyes and blonde hair".  Then I blinked my eyelashes rapidly.  He, Patty and I had a very good laugh.  It made my day.

Barbara...the attorney who helped me renew my FM3 in August thinks the new regs will not be fully implemented until next April...pero quien sabe? He also said that the new policy will include a new provision that will not need renewal as long as you live here...and it won't be all that expensive...maybe $250 USD...buena suerte mi hija!

So, you have joined the FM2 queue. I may, as well, come April. After all, I may be a homeowner by then.

Manzanillo immigration recently said the new regs may not be in place until early next year meaning I may need another FM. Was really hoping to jump to 'residente permanente' and be done with the visa scene.

When it comes to INM, who knows. I'll would LOVE to go to "reidente permanente" Sparks, if possible, and never have to go again. I'm sure there will be some stipulation, with my luck, that will prevent it.
We'll see.