A Day of Sourcing Furnishings and Accessories in Mexico! 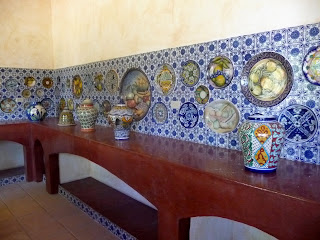 It's been many years since I hit the roads around town for furnishings and accessories.  I used to do this for a living as part of my export business when I was designing Tex Mex restaurants in the 80's and 90's.  Often multiple projects at a time.

Most of that, in fact almost all of it, was either in Guadalajara or Patzcuaro.  Funny, funny memories popped into my head on Thursday as I was trooping through sandy yards and old buildings.

The photo above is from the showroom of San Gabriel tile factory.  It is unbelievable how much things have changed in twenty years.  The first time I went to their factory, twenty years ago, it was down a dusty road with tiles glued on the outside of the building to show that they made tile.  The growth has been caused, in part, by NAFTA.  Going to Delores shows how significant an impact that law has had, in a positive way on the economy of Mexico.

San Gabriel no longer just makes tiles but also lots of talavera as seen by the plates embedded in the wall of the showroom kitchen. 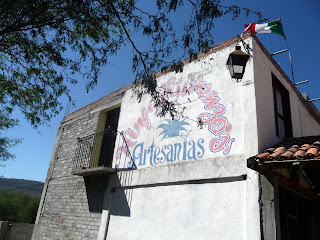 One of the purposes of the trip was to order counter stools for a friend for his new home.  When I saw these stools featured in a House Beautiful article last month, I knew immediately everywhere the people had gone for everything.

So when my friend wanted these counter stools, I offered to take him.  Can you read the sign on the side of this building?  It says Ninfa Laurénzo's Artesanias.  For anyone living in Texas, especially the Houston area, Ninfa was a pioneer in the Tex-Mex restaurant business.

She, like I, had been widowed and raised her children alone - many of whom are in the restaurant business still to this day.  The sons now own a chain called El Tiempo.  Ninfa's was sold.

We became friends through my involvement in the Texas Restaurant Association and as President of Roundtable for Women in Foodservice.  RWF was a national organization.

Ninfa was always ready to help in our scholarship endeavors with guest appearances at our functions.  What a lady!  When she died, the church in downtown Houston was literally filled to overflowing.  That is when I met the nephew who operates the place that is in the photo above.  He was making furniture here for use in the restaurants in the Houston area.  Small world. 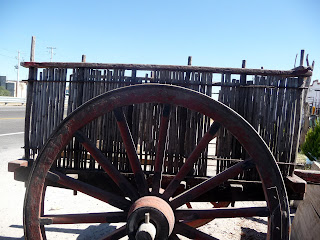 Love this cart.  We used to take these and retrofit them for salad bars in some high end Mexican restaurants.  If I had been "working", I would have bought this on the spot.  But now, I''m just enjoying. 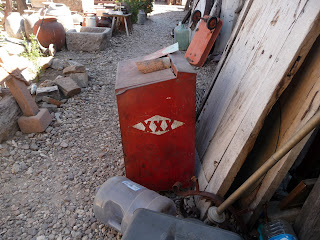 Seeing these old drink cases used to make my heart race.  Great "decor" items for a funky chain, Tex-Mex or not. 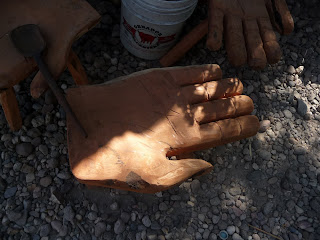 The hand stools are something new.  Never seen them before and there were about five of them.  An artisan must have just gotten an idea and voila, here they are.  I wished that I had somewhere to use them. 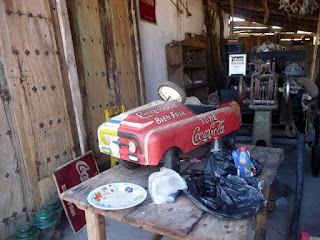 More stuff to use for decoration.  Note the coca-cola sign just resting against the wall?  Oh my, it is worth money! 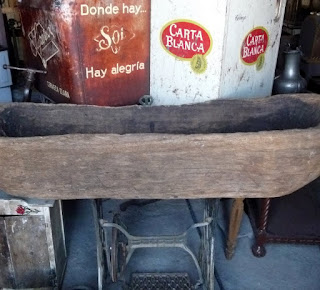 These huge bateas are getting more and more scarce.  I used to find them everywhere for no more then, at the most $5US.  No more.  They are pricey but still worth it to have something made by hand.
People use them to put decorative items in or to put plants in in the garden. 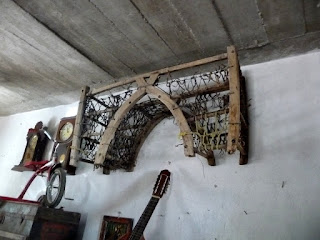 This, to me, is a crowning jewel.  It is a back harness to go on the back of the burros to carry wood or corn stalks or whatever. I haven't seen one of these in at least ten years.  They don't make them anymore.  It can be used to make a coffee table with a piece of glass on it or, to just hang on the wall as it is here.  It's a reminder of a time long ago.

I must tell you, my adrenalin was pumping that day as we placed the order for the mesquite counter stools.   Looked at other furniture.  Priced other items.  It felt like "my other self" had come back to life to help someone in a field that provided me with such a great life.

Always adding to the fun is the interaction with the owner, the carpenter, his family who seems to always be around.  I was never a designer who ordered from catalogs.  I always wanted the unique, authentic and different.  It was harder work.  It was worth it.

I can't wait to take this friend next week to some other areas in another direction.  Then another day down a dirt road to see things he would never imagine could be made in such primitive conditions.

At the end of the day, I thanked him for allowing me to take him to these places.  He looked at me strangely.  But, I meant it.  It was fun.  Can you imagine that I used to get paid very well to do this in my other life?  Who knew?

The hand chair is a knockoff of the Pedro Friedeberg open hand chair.

They both are hands but there is no similarity with Pedro Friedberg's chair. I sold one of his chairs and it was much more refined and with a back. This is just a little rustic stool.

Freideberg did 2 kinds of hand chairs. One had a back, and the other, the open hand, had no back.

Barbara, I envy you your previous employment. What a great way to make a living! That was quite a treasure trove at Ninfa's, I'd like to know where it is.

When do you want to go to the circus?

What do you think about tomorrow evening or Tuesday evening?
Are ya'll going to Hank;s for Halloween?

OMG some great stuff! Wish you were close to here to help us find the 'good stuff!' ;-0

Me too! Although I don't know anything about your area other then Oaxaca and the villages nearby are a treasure trove of GREAT items!

I keep looking at where ya'll are and just can't figure out how to get there from here!

Too expensive and too far!

Where is San Gabriel? I used to love Ninfas. They had the best green salsa.

San Gabriel is a tile company half way between San Miguel and Delores Hidalgo on the right side of the road.