It's interesting how things that you have in your life, in your home go unnoticed a lot of the time.  I was moving some things around in the area of the house where this precious photo is  located and stopped and just admired it all over again.  Of course it has a story with it. 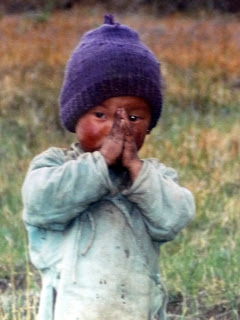 When my son was in his early 30's he backpacked for three years starting in Australia and ending up in Nepal.  While on his hike up to the base camp at Everest, this little guy was on the trail.  He said he was about two years old.
My son loves children.  Always has.  Is the "favorite" uncle to five nieces and nephews. And a wonderful father to his two children.   Children flock to him because of his kindness and gentleness with them.  So, he engaged this little guy in an attempt at conversation.  When he got ready to leave him, he went to take a photograph and the little tike said to him, "Namiste".

When the trip was over and we were looking though the zillions of photos that he had taken (he's a phenomenal photographer) this photo was my favorite.  For Christmas one year my son had had a copy made and framed for me.  It touched my heart.

When the world is fighting with each other and people aren't being kind, I can look at this photo and get a sense of inner peace - from a little boy in Nepal who I'll never meet.