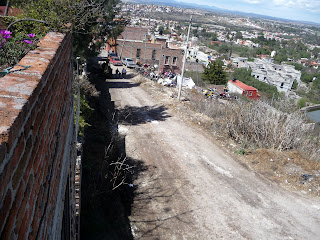 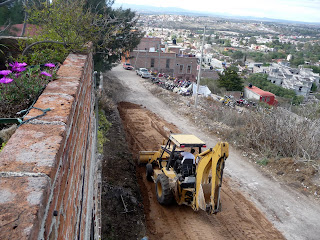 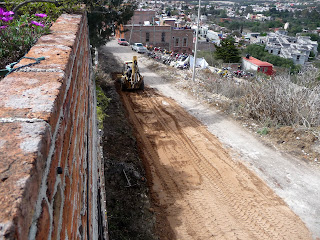 One never knows what to expect on a daily basis here in Mexico.

Today my walking path that the children use to walk to the primary school across from my house became a road. Not happy about this development.

It is a path that has had very little traveling vehicles. This change of events has occurred due to the fact that the closest parallel road, Homobono and Cuesta de San Jose, are trenched down about six feet as a huge pipe for a sewer line is installed. The work has been going on since November. They're finally up here at the top of the hill and ready to close the last block that allowed people to bypass this dirt walking path.

The bulldozer arrived at about 9AM and left about 5. Somewhere midway in the process I just HAD to go find out what the future was going to bring to my house right next to the "new" road. It seems that ALL traffic coming up the hill will be coming by my house for "no longer then a month" according to the Transito man. We'll see. Although they have been relatively prompt and on time on other projects in the last couple of years.

Our conversation was laughable. I've learned to say, first off, "Mi Espanol es muy mal". It always brings a smile and a reply from each person that their English is likewise. So thoughtful. Then we launch in........they talking very fast, me talking in Spanish and English. Hysterical.

What the man did NOT tell me was that the trees next to the house and the small patch of grass that I have nursed for eleven years was going to be hacked up by the guy in the red shirt. I'm very philosophical about this kind of stuff.
Either it will grow back or it won't. The trees certainly are history but they were here when I got here so I don't have any claim to any of it other then watching the birds land on them.

I wanted to have the guts to ask them to smooth out the dirt they put on the side of the road. I didn't have the guts.

Someone I know relatively well is running for Mayor. If he wins, I'm going to present a landscaping plan to him to turn this into a mirador for people to come and see the canyon and presa. I've floated the idea to the garden club but they already have lots of projects.

If everyone could observe all the families and individuals who walk to the edge of the cliff or just stop in motion to enjoy the view, they would understand how this could be a lovely setting. It wouldn't take much if the appropriate materials would be used.

I think, after Cuesta de San Jose is reopened, there will not be traffic again. Other then foot traffic. We'll see........

In the name of 'progress' - grrrr. We had a lovely vacant lot next to us turned into a 4 plex rental in the last year (had to endure the building process for that long too).

Nice view you have there.

Grrr is right! I should also show a photo of the WALL the school has built so they have a parking lot for the teachers. From one of my windows it blocks the view of the canyon.
Double Grrrr.
They spent all that money on a parking lot but don't have enough books for the children.
What's wrong with that picture?

Oh dear...this is not good and I do hope it is temporary.