Another Season of My Life ENDS! 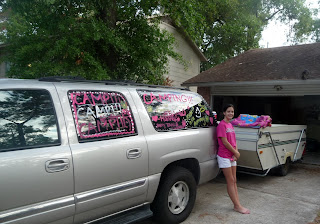 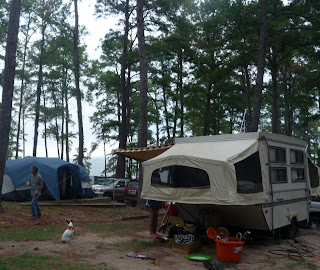 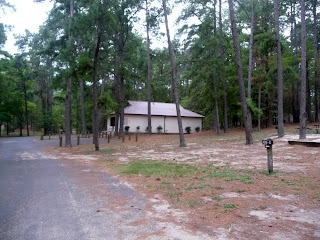 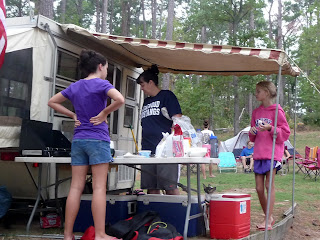 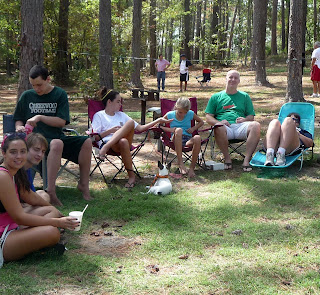 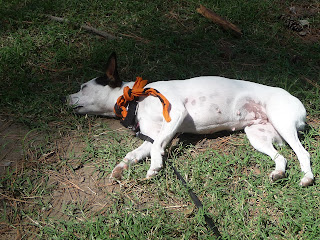 The "Grand Family Organizer", my daughter Julie, started talking about a grand camping adventure even before I got to Texas. She knew that I always loved camping. Of course that was "mumble something" years ago when I was a Girl Scout leader for seven years. Yes, a little known fact about my life.

I had never camped growing up but I took to it like a duck to water when my kids were old enough to be in Scouts. What fun! S'mores, streaking, cooking on a campfire. THAT is what went through my mind - well, not the streaking anymore.

The big weekend came. My daughter had every detail taken care of from food to bedding to EVERYTHING that has to go when a family of six plus one goes with you. Geez, it was something. Both her car and mine were packed to the top.

The girls, Emma and Hannah, had fun decorating the windows of Julie's car with all kinds of messages about camping. They were proud! It garnered favorable comments from the people at the front gate when we got to the state park.

We got to our spot. I had never had the "adventure" of a pop up camper. It is really cute inside. Two or more beds. I use that term loosely. I did make a note that the bathrooms were pretty darn far away - especially if and when one is walking at night. Say 1AM!

All set up. It was darn hot that day so we were all chugalugging drinks. (There is a reason I'm sharing that information) The best part is the great conversations that happen with the grandkids. No electronic devices, equals conversation. I heard about potential boyfriends. Things they like and don't like at school. Other stuff that was very enlightening coming from an eleven year old and soon-to-be fourteen year old.

Even my oldest granddaughter drove over from Texas A&M with her boyfriend. He brought his own tent. Smart guy! Super time with all of them.

Then night fell. I gave up and went into the "pop up" trailer. I was blessed to be able to sleep in there with my daughter. All the guys and younger kids were in tents. Glory be, I was glad I wasn't.

As it got really cool that night, guess what happened. Yup, I had to get up and trek down the road to the banos. I'm embarrassed to say it was many more times then once. IT WAS VERY DARK! At one point an owl "hooed" and I jumped.

I lasted about 24 hours. Worn out, looking like Maggie the dog, I decided that this season of my life is over. I retreated to the comfort of my daughter's house, about an hour away, where there were bathrooms, beds, and air-conditioning plus a swimming pool.

THAT is now my idea of a good life!

Girl Scout leader?! The Girl Scouts are caught up in lots of controversy these days due to their having fallen into the mitts of left-wing, fire-breathing feminists.

The Boy Scouts, however, carry on down their traditional path. Bless them.

Silly, silly. My daughter has been a leader for over 10 years. All my granddaughters have been in Scouts. Their interests are selling cookies, making friends, learning new skills. I don't think any leaders or kids ever cared about someone's politics or stance on anything other then the fun of Scouts.

I am referring to the national leadership. It's filtering down. Perhaps it has not reached traditional Texas yet. Be patient.

Oh STOP being so negative and think of all the good!

Ah the paranoid right. Either feminazi's in the Girl Scouts or pedophiles in the Boy Scouts, neither organization has escaped the gossip. I think there are dangers everywhere and smart people educate their children to recognize them. Dumb people run in circles saying the sky is falling and blaming the devil or the democrats.

Back to your camping trip, there is a reason that retirees switch to RVs. After a certain age, there is nothing that beats having your own sheets and your own bathroom.

Thanks Jonna for saying it ALL so eloquently!

A thorough reading of my many internet goings-on over the past seven years will reveal that I have never, even once, indulged in name-calling, which has become rampant in cyberspace.

Nor do I permit name-calling on comments on my website. Never. It's rude.

This is "eloquent"? Ms. Babs, you disappoint me.

Apart from the name-calling, I have to wonder how someone who supports abortion rights and gay rights, among other "progressive" things, would be classified as rightwing, paranoid or otherwise.

Felipe, the post was written about a fun, happy, enjoyable family outing. You changed it by throwing out the term "left-wing, fire-breathing feminists.
I tried to downplay that with my following two comments. I didn't take it personally although I am a left-wing feminist - not fire-breathing however.
I don't sanction what anyone writes on this blog. Jonna did talk about the right-wing paranoia. I took it as a generalization and didn't think it was specifically directed at one person. That you took it personally is very interesting. Sorry you were offended. I'm often offended by things you say and just pass it by.........life is too short! My Mom always said if you don't have something kind to say, don't say anything at all.

Love camping but I'm with you in the RVing style of camp living....tho do admit I prefer throwing my sleeping mat on the roof rather than inside - if the weather permits. There are some super deals on them now due to the economy.

That said, our big old comfortable Itasca Sunflyer hasn't been on the road since 2003. It's now tucked up in our hanger serving us well as the perfect pull-out guest apartment and/or emergency shelter.

Your post & photos bring back memories of good times.