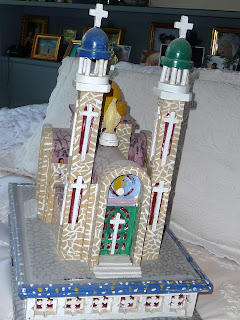 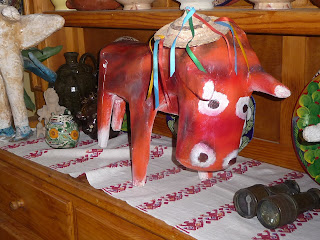 In 2007 I traveled all over North Carolina and a bit of South Carolina with the Orange Show of Visionary Art. It was an "Eyeopener Tour" to meet outsider artists and to visit sites and museums from Asheville to Roanoke Rapids and every place, it seemed, inbetween.

Two of the highlights of that trip were meeting "Sam the Dot Man" in Winston Salem and Hubert Walters in Troutman, NC.
I had read about both of them along with many others I met on that trip, including Vollis Simpson who makes the most amazing whirly-gigs and Mr. Pearl Fryer who has had a documentary made about his gardens that are all espaliered trees and shrubs. (He has been featured in Smithsonian magazine and PBS aired the documentary).

It was a great trip. I recommend visiting North Carolina to see a myriad of artesans to everyone. In addition, it is a beautiful state.

I've posted photos of two pieces of outsider art that I purchased and now would like to sell. The church made by Mr. Sam and "Mr No Bull" (my name) made by Mr. Hubert Walters who is now deceased. The bull is made of bondo as Mr. Walters was a shipbuilder in his working life.

The church is only $200 and the bull is $120. Exactly what I paid four years ago plus the shipping to get them back to Houston at the time.

I will be driving to Houston next week. If anyone is interested, I can take those pieces with me and ship from there.

Those of you who know outsider art will recognize the names of the artists. Those who don't can put those names into your search engines and be amazed at the accolades and large following these two men have had for years.

I need more room and need to part with some of my precious treasures. My loss is your gain!

Babs, I have enjoyed your posts about Outsider Art. I have never heard that expression before although I love the roots type creativity these craftsman come up with and probably don't even consider themselves artist.

In the 1960's here in SoCal Edward Kienholtz came to prominence with his forms of Outsider Art but shot to fame and certainly was never considered an outsider.
I will consider taking one of those art junkets that you wrote about. Love the two pieces pictured.

You're right that Edward Kienholtz was somewhat of an outsider artist.

The term has more to do with the compulsion to create, not to sell but just the NEED. Many of the former artists were illiterate, often heard voices, and many were institutionalized.

The black artists such as Mose Toliver, and so many others created in a naive manner with materials such as house paint, mud, and other materials that didn't cost much money.

It is a whole genre that has skyrocketed in value in the last 20 years - there are huge shows in NYC and elsewhere where the work sells for hundreds of many thousands of dollars.

It is fascinating to me. Have taken a course at Rice University in the past and other places to find out more - not to mention the trips and the zillions of books I've read.

Most of the people never considered themselves artist.