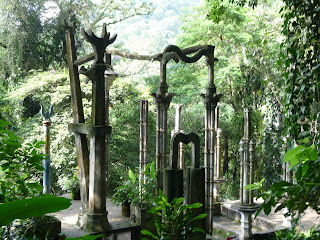 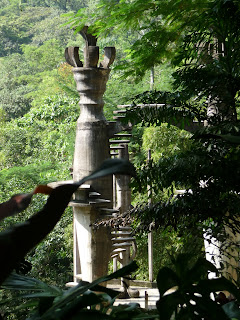 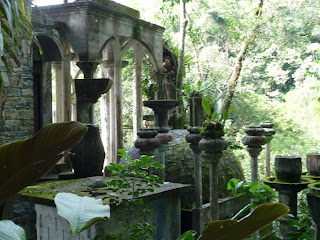 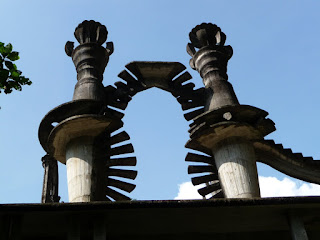 I've been going through all the literature that I save from each trip. In addition, articles I saved over the years, some as far back as the early 80's, of places in Mexico I wanted to see. Most are on "road less traveled" places. Ones that are not necessarily that easy to get to - hence not touristy.

The above photos are of Las Pozas up on the edge of the states of San Luis Potosi and Queretaro. It is the sculpture gardens designed and built by Edward James over a twenty year period. A six hour drive from San Miguel, it is well worth the trip. I seldom go back to places but I first went there in 1999 and have been back several times since.

In addition to going to Xilitla to see Las Pozas (and staying at El Castillo), one can see the missions that were built and overseen by Fr. Serra. He is the missionary who after being in that area until these missions were completed, then walked to California and built and supervised the missions up the California coast. Can you imagine accomplishing all that in a lifetime? Especially during THAT time?

This morning I was going through photo boxes, pre-digital camera, and my oh my, have I been blessed to see and be in amazing places. The photos of Guatemala almost made me cry due to their beauty. So many memories flooded back from hiking through Tikal; the church in Chichicastenango; the ponga to the villages on Lake Atitlan. What an incredibly beautiful country. I'll post some of those photos in days to come.

I also came across photos of Tequisquiapan and Malinalco. Two villages that were total surprises. It's enchanting to have no expectations of a place. Both of those towns are two of my favorites. Tequisquiapan because the centro is compact and sparkling clean. The mercado had some of the most incredibly beautiful specimens of minerals that I've seen in a long time. In my past life, I loved to shadow box those and use them in room decor in hotels rather then paintings.

Malinalco said "Shangria La" to me - truly. I was leaving the village and I just said out loud, "This is Shangria La". It had an aura unlike any place, and I do mean any place, I have ever traveled to. A very tiny village but it has two very important historical sites to see. A monastery whose murals have all been restored. And the most amazing pyramid, built by the Aztecs. I'll write more about this in a later post.

I'm putting together possible "off the beaten track" tours for a friend. Places people would like to see, but won't go on their own. I hope that my grouping will pay off for them. In doing this I realized that Mexico City is a great place to use as your central point and then spoke out in various directions. I've come up with six tours, just doing that!

So much to see for some and so little time! I'm glad I have been so lucky as to have been to so many wonderful places in this fantastic, surreal country.

The out-of-the-way places are often eye-opening and exciting. Thanks for telling us about them. It's time for me to go back to Guatemala. It's been 45 years.

I found Guatemala more colorful then Mexico! I hope I get back there soon.
My upcoming list is Cuba, Merida, and the area south of Veracruz. All places I have yet to go......oh, and Corn Island in Nicaragua.....That will be 2012 for the above.
Will be up in Houston in Sept however and hope to see you and Jo Ann........

Thanks for a couple of new travel ideas. Having spent a lot of time in Querétaro over the years, I have been to Tequis a few times, but never have gotten to Malinalco. It's now on my list, along with Las Pozas and the other sights you've mentioned in that area.

Many thanks for two brand new journey suggestions. Getting invested considerable time within Querétaro through the years, I've been in order to Tequis several times, however not have reached Malinalco. It is right now upon my personal checklist, together with Las Pozas and also the additional places you have pointed out for the reason that region.