Churches in the Sunset 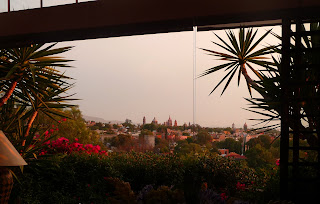 Usually at sunset I'm photographing the sunset or the beach and sunset. But this photo was taken while I was at a dinner party a couple of months ago at a friend's home.

I didn't realize until I got home and looked at it on the screen that I had gotten twelve of the thirty-two churches in San Miguel in one shot.

I was so enamored with the light and the view, I truly didn't know what I had done.

That rose hue is lovely, isn't it?

The only reason you can't see the other twenty churches is that either they don't have a bell tower or they are in different parts of town. I must confess I haven't been in all thirty-two. Nor have I been in the capillas in the campos.

They have just set up tours on Friday and Saturday to go to see the capillas. The plan is ingenious. Each village is responsible for charging admission which reminds me of Chiapas where some villages won't let you enter without paying 20 pesos. A brilliant idea in my opinion. Anyway, not only are they charging, but they also have little food kiosks and stands set up with food cooked by the village women. While perched on a stool, I can just imagine a hearty soup or whatever that village is known for cooking to perfection.

Hopefully the plan will cause people in San Miguel to see the capillas. Hopefully it will also cause the people to see the villages, leave a few pesos and have a good time.

A win, win for everyone.

Of course most of the capillas are not as grand as the churches of San Miguel. However that doesn't mean that they don't have a charm or history of their own. Stay tuned. I'll regale you with the stories and photos after I've gone.
In the meantime, enjoy the churches in this photo.

Could you post some information about the village capilla tours? Pretty please :)

Will do Bob. There was a whole article about it in the paper this week, Atencion. Let me track it down and I'll get back to you!

Here is additional information on the tour of the viceretal chapels built in the 17th and 18th century.
There are 6 chapels. You can take a self-guided tour or go to the tourism office just to the left of the entrance to the Parroquia to sign up for a guided tour. They are held Saturdays and Sundays from 11-5. Allow 3-4 hours to tour 3-4 chapels! The first is Montecello de Nieto, Banda, San Isidro de Bandita, Oaxaca, Cruz del Palmar and the last on the path is San Isidro Capadero. The road is between San Miguel and Atotonilco heading West. "it is a community program, and the incomes will not go to big companies. The money is for the people". Hope this info helps...

That should read viceregal not the word I typed!

Very good and detailed information about the capilla tours can be read at www.ranchosantaclara.blogspot.com
Enjoy!