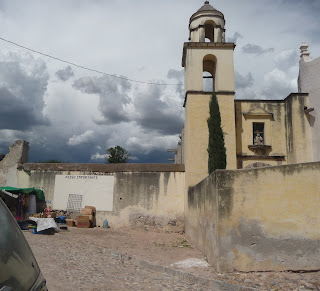 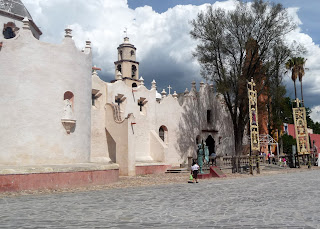 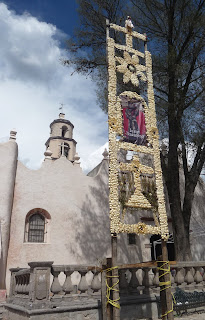 I have taken so many photos at Atotonilco where the third most visited religious site in Mexico is located. The difference today was that our daily rainstorm was coming. The coloring of the dark clouds against the white of the building was a stark contrast.

I traveled to Atotonilco with Steve from Melaque who is spending this month in San Miguel. I figured he needed to see at least one tourist site. I think he was underwhelmed. Maybe the history of the restoration would have an impact on anyone who sees it if they could have seen what it looked like ten years ago. Luckily locals of San Miguel and Atotonilco came together years ago and contacted the UN World Heritage Site committee. Upon inspection of the church and the hand painted murals done by a naive painter of the area, they added the church to the list of structures in danger of disappearing from neglect and disrepair.

A few thousand dollars here and a few thousand there were collected. Little by little as money came in architectural restoration work began. It was slow going. I had a group of Mexican folk art collectors who came to San Miguel on a tour and they donated $5000US dollars to the restoration. I was so proud of those people for this huge donation to this building referred to as the "Sistine Chapel of Mexico".

It's not a style of frescoes that I enjoy. A lot of it is very severe and shows a lot of self-flagalation and the pain of sacrifice. But the fact that it was done in the 1700's, had a huge part in the Revolution and is very important to the Mexican people, is important as a whole.

Obviously the United Nations World Heritage Site committee felt the same way in designating it a UN World Heritage site.
Restoration has been going on at a galloping pace ever since then. There is even restoration of the central part of the small village as well.

Atontonilco's one of my favorite places. Sure, there's the miracle aspect, but there are also great opportunities to pick up the perfect gifts for those who have everything. You know, those framed-in-genuine gold pieces of fine art illuminated by a red or green Christmas light bulb. Those are presents that'll just take your breath away -- and the recipients will cherish them forever. Or forget to take them home, which means that you can regift them again. And those crowns and whips, why that's stuff you just don't come across every day!

I suspect what appeared to be "underwhelmed" was just my natural reserve. The church is one of those places I would like to return to with a book describing the various frescoes. I could easily spend a day sitting there analyzing all of the art work.

Atotonilco is a very special place in Mexican history. It is the first stop that Miguel Hidalgo made on his way to San Miguel after the "Grito de Independencia" and it is where he adopted the banner with the picture of the "Virgin de Guadalupe". The Spaniards used a picture of "Nuestro Señora de los Remedios" on their banner because it was the virgen of the Conquistadors and thence began what some call the war of the two virgins.

oh Jennifer, I'm so sorry that I forgot to take your xmas present home. I hope you are enjoying the VG with xmas lights and tinsel that I gifted you?

I thought Atotonilco was very moving and beautiful and I saw it only before the restoration. I'd love to visit again with everything lighter and clearer. The story of the pilgrimage every year is pretty incredible, but then I love that kind of over the top devotion. Steve is more of a puritan, bare pews, plain cross and serious about the words. Meh! Give me whips and bleeding backs and crawling on knees with candles and incense.

Hi Bob - That is interesting information that I have never heard before.
Atotonilco is certainly venerated by Mexican nationals and the indigenous peoples.

Jonna, you and I are in the same pew. I'm overwhelmed by the devotion in this country. People on pilgrimages from sunset to sunup. The women sewing. The men being whipped. It is truly startling.

Steve did comment that it overwhelmed his Quaker background. I can certainly understand that.

I WISH I had scene a Virgin with red and green lights, I would have bought one. Now that they are gentrifying the town, they've moved the booths from right in front of the church to down the street. BAH HUMBUG!