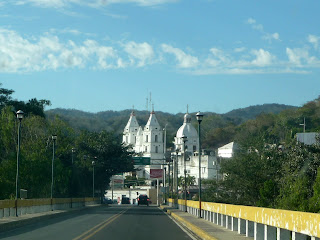 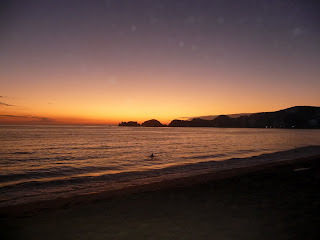 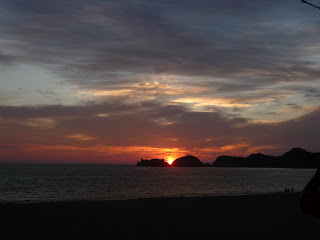 To begin this post, I've put in the photo of the church in Cijuatlan that didn't publish in the last post. Not sure of the spelling of the town and too lazy to go to the car to look at the map.

But the next photo is the zowee one. That white wave is actually a whale blow! Oh my gosh, I was so excited the first time we could see them out in the bay. After the blow you would see their backs arched in the ocean. Way cool. They come every day about 4PM and stay til about 5:30. I can remember so many years in Galveston knowing that the dolphins came at about that same time and making sure I was down on the beach to watch them. I was doing the same thing at Melaque, but it was WHALES!

In consulting with my wildlife biologist son, I was told it is a minke whale and that they calve in this area this time of the year. Amazing.

Add to that the following experience. We were over at La Manzanilla beach several days. La Manzanilla ia about 20 minutes north of Melaque on the Bay of Tenacatita. One day all kinds of birds, frigates, pelicans, egrets and other kinds starting gathering in one spot not far off shore. At first I thought it was just a school of fish, but then as I sat up and watched, it was a whale.........and then another........and then another.

It was so close that with a kayak one could have quickly gotten out closer. It was awesome. They frolicked and stayed in the area for at least an hour.

See how much you can accomplish in life when you're not doing anything but being aware of your surroundings?

When we weren't watchiing the whales, we were watching the sunsets. I tried, but didn't succeed, in seeing each and every one. Gosh they were so beautiful.

Here are just two of zillions of photos I took of the sunsets! Don't want to bore you.

Cihuatlán. But I am sure it has had many spellings over the years. It's funny. I have meant to post about that church, but I have not yet done it.

Every time I visit inland I miss the very things you talk about in this post. But the summer heat will make me soon forget them. Especially since the whales will be headed north by then.

Whales! How fun! I've only seen them once off the coast of Baja.

Further info - in an article in the Guadalajara Reporter it said that about 2000 humpback whales come down 6000 miles to breed and calve in Banderas Bay which is two hours north of Melaque. We must have seen the stragglers........ha. It was quite mesmerizing.