Fall is Coming to West Virginia 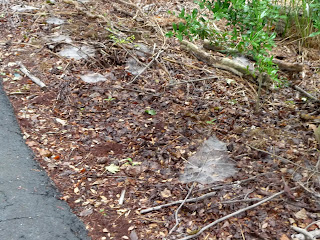 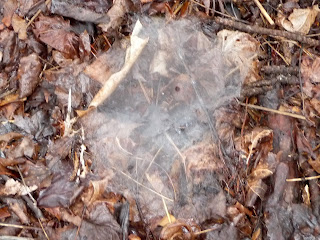 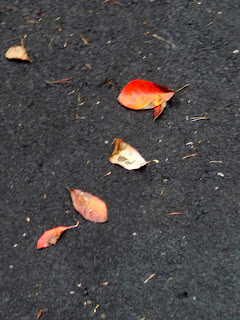 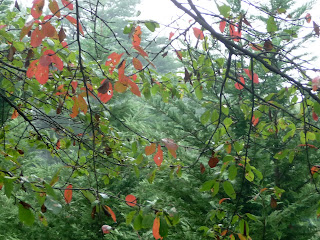 Yes, I realize this is only the first of September. However, last week I went out in the yard to see these "webs" that were all over the place and the turning leaves. Now I admit, there aren't many leaves turning yet, but heck, after living where they DON'T turn at all, I'll take every little bit I can see.

The webs are fascinating and were gone in a couple of days. I was afraid they were webworms but didn't see anything except dew accumulating on top of them early in the morning. Quite awesome to see.

This area of West Virginia which is wedged between Maryland, virginia and darn close to Pennsylvania is full of all kinds of vistas. Most I didn't expect. The rolling hills and ridges. Lush green pastures. Apple orchards for as far as the eye can see. Magnificent old barns, stone houses and even old, old log cabins. Some in good shape for the fact that they were built in the 1700's. Others are in not so good shape but oh my, the land they sit on with clear running creeks and brooks are picturesque. In Martinsburg, West Va., which is not far from here, there are over 3000 designated historical structures!

One of the sights that I find not so attractive and quite disheartening is the amount of extremely obese people that are seen in the stores and parking lots. Shockingly so. Their obesity is such that many use wheeled carts to get around. I'm not talking old people. I'm talking people from 30 years old on up. Very shocking.

What the heck is going on? Thinking back to just five years ago, there was definitely not a prevalance of morbidly obese as there are now.

What is the solution to conquering or assisting people in this situation? I did notice at Super Walmart
that the majority of their food is junk food - probably 80% of it and very little of it is nutritious.

I don't know the answer. Hopefully someone does. What do you think? Any suggestions or solutioins?

Babs,
All you have to do is watch Jamie Oliver's struggle to get "good" food into one of the schools systems in WVA, and all will be explained. As to the changing season? you must be at altitude as here in the Raleigh area we are at 97F and waiting on Earle.. Enjoy your holidays in the cool!
Dan in NC

Hi Barbara, thanks for the kind words in regards to my blog. I was going for the sound of the life around me, using words and scat to create the beat.
As for the obese, they are everywhere in America and it is my feeling that it is the result of the fast food nation they grew up in. A result of tired parents who both work out side the home and Mc Donalds rules the day and sets the standard for what is thought to be food to most people. As you noticed their carts are full of crap and so are their bodies.

Convenience and apathy, people are lazy. Rather than cooking something nutritious at home it's much easier to just to buy packaged goods ( can you imagine the amount salt)?
They seem unconcerned about the health consequences and just look forward to the next bag of chips.

When will you be retuning to San Miguel?

Ditto to Dan in NC. We start with feeding crap to kids in the schools and then run them through Mickey D's for dinner. You would see the same in the Kemah WalMart. On road trips we like to eat at Cracker Barrels as the food is consistent and pretty good but OMG, observing what is plopping down around me keeps me to a salad. Obesity is everywhere in the US, my dear, where no one walks like folks do in San Miguel. Sad, but true.

Unfortunately in our society it is easier and cheaper to buy "junk food" than it is nutrious food.

So true! Another interesting observation is this. While shopping at Target and Costco recently I did not see the obese people tat I see at Walmart.......comments?

Greg, I'll be back in SMA by the 3end of September.