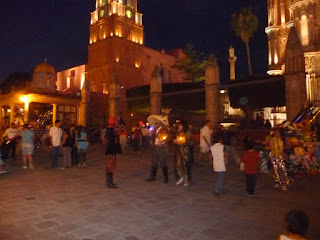 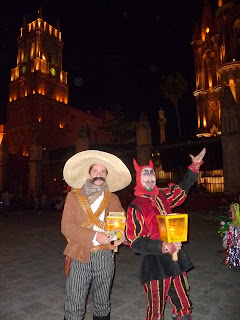 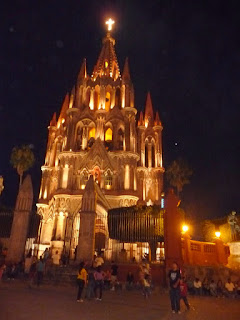 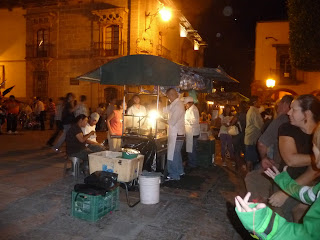 It has ALWAYS been that one can walk to the jardin at night in San Miguel de Allende and see some kind of activity.
Be it mariachis or, the estudiantes in their velvet Renaissance costumes from Guanajuato or assorted other things.
But pretty much you can count on something going on............

Now, add to that the bicentennial and the lightshow on the buildings in the jardin area and every night is full of energy and people.

We trekked down the hill one night to see the light show, a few nights after it started. Obviously lots of other people had also. Alas, no light show. No explanation other then that "it hadn't happened the night before either". No announcement, just whispering from one person to the other, "no light show tonight". No one got excited or angry. Some shrugged.

The jardin being what it is the show of the milling people was enough for us to watch. People in costumes with lanterns performed on the stairs next to the Parroquia. Vendors were selling food. People were singing aNd walking around. Children were playing with balloons.

The lighting that night had a surreal quality to it. Like we were watching a scene from an old time movie. It was lovely.

Eventually after walking and watching for a while we taxied back up the hill. Such are the things in San Miguel that I enjoy so much. Never knowing what will happen..........