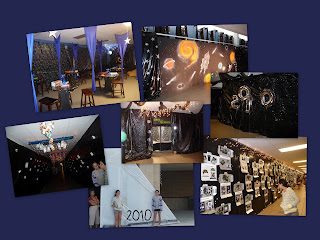 I was privileged when in the USA for my granddaughter's graduation to hear about a program called "Project Graduation".

It was started by dedicated parents to keep their kids off the streets the night of graduation by providing fun, safe things to do that didn't include drinking and driving. I don't know how long the program has been going on but it sure is a big deal in the States now. I also didn't know that my daughter was Chairwoman of this event! She and hundreds of volunteers along with her committee worked on this for a year. Planning, soliciting donations, and executing the whole thing. I think she could run a Fortune 500 company or the military after seeing all of this.

One of the interesting facts of this whole thing is that once the kids arrived they could NOT leave until 6AM unless their parents were called to come and get them. Out of 600 graduates over 500 were there. An incredible achievement, I think.

The plan was to take over the school and decorate almost all of it in the Space Odyssey 2010 theme. They only had about 36 hours to achieve this feat. The chairwoman of decorating is a display designer. Clever would be an understatement as far as the decorations were concerned. For instance, one hallway was designated "The Milky Way" and milk cartons with sparkling decorations were hung from the ceiling the full length of the hall. Another was the planets, she got weather baloons that were then painted by volunteers and hung as the Constellation in the cafeteria. Bubblewrap was used to make tall light sconces. The packing styrofoam used in packing large boxes was spray painted grey to use as decorations on the wall - very effectively. Only if you walked up and studied these things could you figure out what they originally were used for. Way cool.


Food was donated. Door prizes were donated for all of the game prizes and drawings. The Grand Prize, a car.

How did they raise the money to put this event on? Bake sales, car washes and raffles. The kids and parents worked for a year. A community working together.........awesome isn't it?

It was open the afternoon before graduation so the parents and public could see the finished product. I was absolutely astounded. I took tons of photos. Unfortunately Picasa only lets you show a few so I made this collage so you could see a little more. The photos don't do it justice. Walking hallway after hallway and looking in each room to see what had been done was a treat.
My daughter didn't go with me. She was home resting after being up for nearly 48 hours straight. She turned off her cell phone and slept. She slept because AFTER graduation that night she and her husband were going to be there from 9PM until 6AM! I'm so proud of her. I once was Chairwoman of an elementary school carnival and said I'd never do THAT again. It was nothing compared to what Julie accomplished this year.
Another cool thing is that the Junior parents are responsible for the cleanup which they had about 12 hours to complete before school on Monday.

Such a collaborative effort! So, when you read that the American family doesn't exist much anymore or do things with their kids, don't believe it. I saw the entire community of Kingwood, Texas cheering on their graduates (and their kids) with work, dedication and love. Quite a wonderful sight and memory.

It is good to tell these stories. There are so many good things that happen - we need to talk about them more.

Note: We are only back in Mexico for 5 weeks this Summer so I picked up the Blog again while we are here.

Dear Ms. Babs - Your post is absolutely wonderful! How heartwarming to hear a good tale about today's youth, their families and the community. Bravo to your daughter!

Yes, I do have much to be proud of. I have an incredible family. My daughter does 10 times as much as I ever did - it is amazing and astonishing. Hopefully she received applause over this latest event.
My son, one of the "Gypsy Kids" is awesome too. And then, to top it all off I have such a kind son-in-law and spunky and wonderful daughter-in-law - how did I get so lucky?
Of course, don't get me started on the grandkids.......YIKES!

Julie is amazing but then she had a great role model. Isn't it fun to see the next generation take it to a new level! So glad you got to take it all in.