A Funny Thing Happened On The Way..... 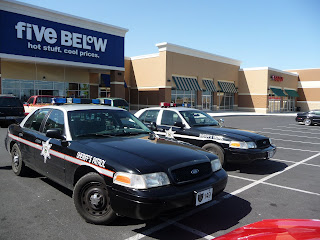 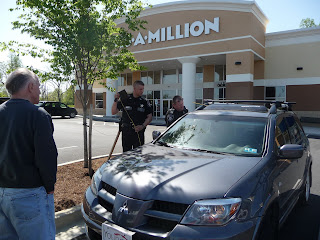 To the bookstore! I needed to go into the bookstore to buy a gift and "the man" wanted to go verify electronic prices at Best Buy. There were groceries in the car that needed to stay cool, so never thinking it would be a problem, the car engine was left running and the remote was removed and the car was locked.

Well guess what, on this particular car, IF the engine is running and the key is in the ignition, the door will NOT unlock. No security officer cruising the parking lot. What to do? Call AAA, well that was a possibility. But when going to call someone, the manager of the bookstore mentioned that the sheriff of that particular county, as a courtesy to its citizens, would come to unlock the car. Wow, who knew?

Low and behold, in about ten minutes, an officer showed up. He had a gizmo that looked like a broken off knife blade or something, to me. He tried and tried. No good. So, he called for a backup. Now it is getting dicey. People are looking. I'm being very, very quiet so as NOT to agitate an already tense situation.........

The second officer shows up with a bladder like device which is inserted in the edge of the door. It is then blown up with air which allows the officer to reach in with something that looks like a bent coat hanger and the door is unlocked.
It worked, finally.

I stood in amazement at the fact that (1) they came, (2) that they persisted, and (3) that they were so polite and courteous. Not a penny exchanged hands. No charge. I commented about it for hours.

And, I also secretly thanked my lucky stars that I wasn't the one to have come up with the idea in the first place.
WHEW!

Too funny (probably not so much at the time!) My car has a keyless ignition and entry - I'm still waiting to do something that it won't like and I'll be in the same mess you guys were in - glad it all worked out OK -

AMIGA! - You can make a minor outing into an adventure ;-)

Charles - I have a BAD habit of seeing the humor at the time when others NOT SO MUCH. So I was laughing hysterically until I saw no one else was........then I quieted down.
Calypso you are SO right.....life is always an adventure - even when I'm not trying for it to be so......

I'm starting to feel like an old grump but I really HATE all these nanny devices that we seem to have no choice about. I want to turn on the damn lights myself, lock the door, be able to unlock a door without permission from the front seat... it's endless on new cars. I may never get another new car because they just make me mad.

And I bet that if you lived in that area, you would vote for that sheriff. Pretty sharp campaign device on his part.

So, is that your new fellow in the bottom photo at the left?

I've been wondering if it would work to do that in a hot parking lot when our dogs are with us. Figured since I have two remotes it wouldn't be a problem. Now, I'm not so sure. Maybe I should learn from your experience. Have you noticed, by the way, that you're more likely to see shaded parking in a Mexican lot than in the States? And yet they'll seize your dog and your car in AZ if you leave them.

Am I to interpret the failure to answer my question means the answer is yes? I think so. Nice-looking fellow.

I forgot to answer both you, First Mate and Jonna.
Yes, that is the man. Thanks.
I agree with you Jonna about the new cars - geez you almost need an aeronautical engineering degree to drive with all the gizmos.
I drive a 98 Nissan pathfinder with NO gizmos and hope it lasts as long as I do......IT is at 140,000 miles but my trusty Mexican mechanic says it is in perfect shape. So I'm happy.
First Mate - I'm still astonished to see dogs and children left in cars. If one can't handle taking the person or animal with them once they park, perhaps, not meaning you, should leave the children or animals at home......it's a scary situation to me.

I´ve got a 2009 Honda CR-V, my first-ever Honda. Everthing about it is pretty ok, but the automatic key absolutely drives me insane. On a daily basis, countless times a day. I won´t go into the key details, but I would not buy the car again based simply on this seemingly small detail. I faxed Honda a complaint, which was ignored.

Next time, I´ll buy a Renault, but only after testing the freaking automatic keys.

After my $180 paint and dent removal project on the Nissan in January - I figure the ole girl will outlast me.
Ha. She has fewer wrinkles now then I do!