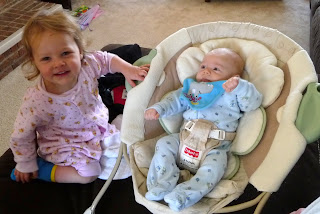 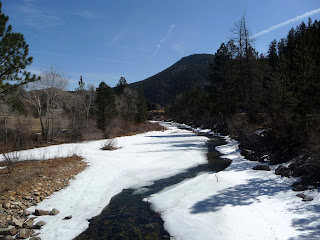 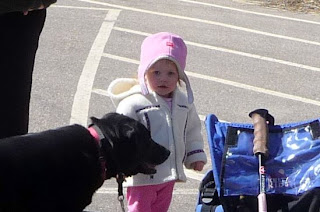 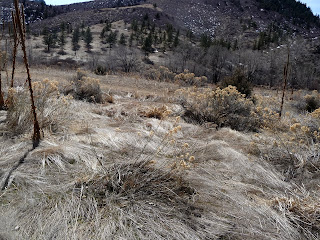 To say that the last three months have been at different elevations and in different terrain would be, as usual, an understatement. December was the blizzard of the Northeast. January was the beautiful warmth of the Pacific Ocean with incredible sunsets. Then February and part of March have been again in the Northeast going through another blizzard. However at this time, it is in the 70's and EVERYTHING is green and breathtakingly beautiful.

To add to the everchanging elevations and terrain, we headed West to see the Gypsy Kids last week. Oh, what fun! I did my normal "on the floor" playing with Matilda. But, there was more, much, much more. The Gypsy Kids new addition, Sebastian Woodrow and I met. A hunk at two months - he weighs close to fourteen pounds. Very alert and a happy baby. He fits right in with the family.

Matilda Isabella, which she has now shortened to Mati, and I played and walked and sang. Zip-a-dee-do-da has almost replaced Patty Cake. More on her later. A whole blog of photos - you've been warned, ha.

In fact, as you can see, we all went hiking one day in the Poudre Canyon which is near Fort Collins. ALL of us. Even Dusty the Dog. Sebastian was in the baby carrier on Mom. Matilda was in the backpack carrier on Dad along with holding the leash for Dusty. I and my man were following closely behind once we all got going.

A beautiful canyon trek. Fording streams, watching for ice and little bits of snow. We found an abandoned homestead of a family who lived there in the 20's with their ten children. A true definition of hardy folk.

Mati was watching for "balled up eagles", her phrase. She has seen them before when she and Dad have gone hiking. Cute, cute.

The weekend we hiked was the first warm weather (60's) that they had had in a looooooooong time so as we headed back there were lots of climbers and dogs heading up the trail.

The very next day we drove to Boulder and it snowed! Not much. Just enough to be cold and miserable. Then sun and warmth for the rest of the visit.

We returned to West Virginia on Thursday. The transformation was astounding. We left to snow on the ground in places and a few buds on the trees. But now it is ALL green and everything is budding out. A month ago I wondered if there was grass under the snow. Now I know there was and is. A happy thought.

My time here is almost over. With reluctance I head back to San Miguel. I guess it is because I want to see the rest of the transformation here - the flowers from the buds - the trees blooming. And, of course, my continued transformation.

Aren't I a lucky lady to have had such a great year? So far? I think it has been so much fun and I look forward with great anticipation to the rest of it.

And it is always good to heaR from you.

Yay! She's back and the babes are ! So you are back to West Virginia before San Miguel? I can't believe you have been gone so long from SM...Velcro will be so happy to see you. Is the man coming along? Me thinks he's a winner.

I can't believe I've been in West Va for 6 weeks and have hardly thought of San Miguel.......hmmmm, Kay what do you think that means?
He IS a winner.......and more.