Traveling Through the Jungle 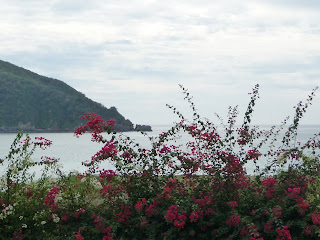 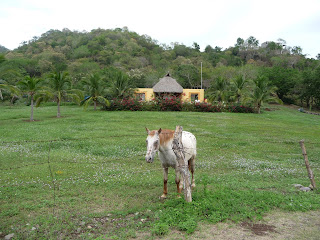 Dreams are a magnficent thing - especially when they come true.

For over 25 years I've known and traveled with a good friend who talked and talked on our travels about how some day he was going to build a house on the coast of Mexico.

He has and here are the photos to prove it. Isn't it lovely? He did it himself through eight years of dealing with government bureaucracy, employees disappearing and a myriad of other difficulties. But, he persevered and now has the pleasure of whale wathing, peace and tranquility. It is a spectacular place.

John is a fearless man. He is one of the hardest workers I've ever known. Singlehandedly he has cleared land of brush, trees, scorpions and giant iguanas. I shake my head in disbelief at all the work. His house overlooks the Bay of Cuestacomate.

Our friendship began 27 years ago when I happened to walk into a little shop in Clear Lake. He imported decorative items from Mexico. He remembers that I was getting ready to drive a truck to Orlando for a condo installation. Hence two fearless people met. I've known him through raising kids - his and mine. In his case, I've known him through a few marriages, ncluding the current one. He met his wife in the airport in Guadalajara when he had dropped me off from a buying trip for one of my projects.

It has been delightful to reconnect on this trip. To see his dream completed has been uplifting. But the most fun has been reminiscing and laughing til our sides hurt at all the crazy experiences we had in the 80's and 90's when we were both importing from Mexico.

If so I met him before he stated construction, still living in the trailer and no other development there

what a view! how about a picture of the house?

Babs, I have enjoyed viewing your lovely beach photos. We used to live in Clear Lake, in fact, we had a restaurant right on Nasa Rd. 1 from 1992-1998. Looking forward to meeting you in the future when we move to SMA in a few years! Cheryl

OMG...how wonderful. I met him through you one time. What a great story and how wonderful that you have kept in touch! You never cease to amaze me. Is he still importing or has he retired?

Nice meeting you the other night. We need to get back together. Oops! I owe you an email.

Yes el jubilado, he did live in a trailer until he could get permits for construction. Teresa, that is a picture of the house......
Cheryl - what restaurant? I lied in Nassau bay for 17 years.......
Kay, John sold Su Casa and moved to Mexico in 2004