Nostalgia Has Taken Over 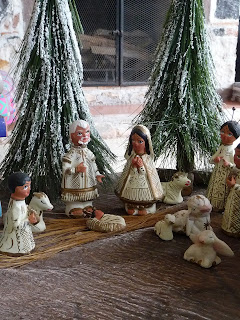 I'm not planning on being in San Miguel for Christmas, so I'm not putting up the myriad of old Christmas decorations. They are all stored in the bodega and I have a LOT of them. Many from when I was a child. In the 50's and 60's. Those beautiful old German glass ones that are hand painted. I do love to take them out and just marvel at their delicateness. But, not this year.

Instead I only found the Nativity Set that I bought in 1974 in Mexico City. It isn't particularly unique. Not at all. It is the memories attached to it that give it prominence for me. Thirty five years ago - WOW. What a time! A long time.

That was the first time I flew into Mexico City. I was captivated immediately looking down on the colors of the buildings. My oh my, I had never seen purple, fuscia, gold, and blue houses. It looked like a string of jewels on the ground. I flew in, not for shopping, but because I was managing a US State Dept contract that was based in the city at the airport.

I was enchanted. Still am. I stayed in the Zona Rosa for $8 US a night in a luxurious hotel. Regretfully I don't remember the name of it. I traveled by subway to the airport on a daily basis and marveled at the people and faces I saw on those daily trips. My first time to observe the indigenous peoples of Mexico. Their faces of such character.

I digress. This blog is about nostalgia and the Nativity Set. I don't remember who took me shopping in Mexico City. The only thing I bought was this Nativity Set. Carefully wrapped by the store, I brought it home to my family. It became part of the tradition each and every year.

It usually sat on a coffee table. Center stage. Children and then grandchildren loved arranging it.........or in some cases rearranging it. One grandchild ALWAYS rearranged the donkies and animals and circled them around the Baby Jesus. I could count on it. I never commented. I would wait til he left and walk in and just smile. How special for me to see.

The Nativity Set has moved many, many times in 35 years. If it could talk, whew, it would have a lot of tales to tell. I think it is so appropriate that somehow it has come home to celebrate its last years back where it was made. If anyone had told me thirty five years ago that I would end up living in Mexico, I would have been astonished. Aren't the mysteries and adventures of life fun to experience?

You are SUCH a traveler! You're really inspiring me.

I'm keeping decorating to a minimum this year, too. I'll be around, but I just don't have much enthusiasm for it.

Cool. I was debating on taking my hand-me-down Nativity Set from my mama here in Louisiana to Honduras this year. Your blog made me think positively about that. I can't take all of my cherished items, but I have to take something! Have a great Christmas.

1st mate - I understand -but a few things WILL cheer you up, I promise.
I remember the first Christmas after my husband died. I put up the tree with the kids and it wouldn't stay up. I couldn't get the tree stand tight enough to hold the tree - so I got fishing line, moved the tree near the curtain rod, and tied the tree to the rod. I cried, but now, it's a precious memory of me surviving. YOU can do it!
Get up, get out and go - it's one of my mottoes.
Laurie - If it's from your Mama and it has memories, take it. Feliz Navidad to you too. I so look forward to being in La. in 2010 to reconnect with long time friends.......it is a great place. Good people, good food.