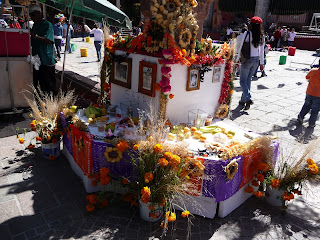 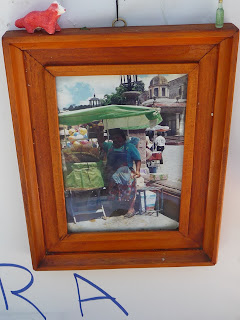 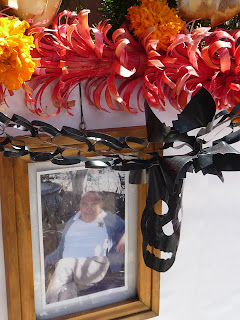 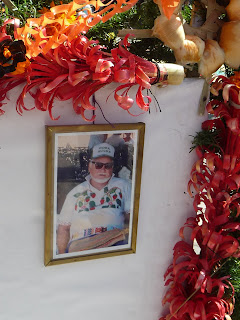 Of all the altars this year, the most poignant was Sara's altar. Sara used to operate one of the push carts at the front of the jardin. A jovial, sunny woman who always had a kind word or kind act for people. Sara had diabetes and some other health issues. We all worried and wondered if Sara would be able to handle all of her ailments and the push cart too.

Those carts are trucked in in the morning and trucked out at night. It's quite a deal to set it up and tear it down on a daily basis. I'm always amazed at the amount of work that goes into these endeavors without a word of complaint.

Sara especially liked two of the curmudgeons on the bench. Bill Maher and Gay Smith, alias Shanghai. You can see photos of each here on this post.

They were definitely characters. Bill arrived from North Carolina in a VW beetle. It broke down here and he never left. It took years to get to know Bill. He didn't say much. Eventually I discovered he had owned a group of hotels and golf courses in North Carolina. A very unassuming guy with a quick wit. I liked ihim a lot.

Now Shanghai was REALLY a character. I met him before I even moved here. He wore a baseball cap that said, "Apts for rent". So, I went to look at a few. He and his novia took care of a lot of property he had acquired here. Very gregarious guy - never met a stranger. He seemed to have "bench duty" on a daily basis. I discovered after many conversations that Shanghai, among his many careers and escapades, had been in the first graduating class at the University of Houston in law. His classmate was Racehorse Haynes who is a good friend of mine. Racehorse is a legend in Texas. The two of them had lost touch with each other and I was thrilled to reconnect them.

When Shanghai discovered he had leukemia and didn't have much time left, he married his Mexican lady, after 17 years of
being together, so she would have all that they had acquired. He was just a great guy.

So people who don't take time to sit on the bench and discover the histories of the people they are talking with are really missing out on great friendships, amazing stories and wonderful memories.

Thanks to Sara's family who every year builds this altar as a reminder to all of us.

Babs - hope your cheek is healing well. You are so right - more often than not it is the unassuming quiet ones we meet who have the most interesting histories. Take care and watch your step!