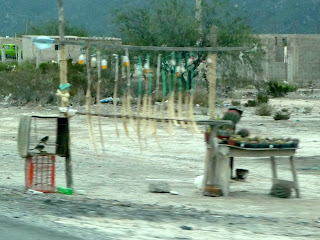 Heading to Harlingen in great anticipation for American food, good shopping and all other good things is great. But it is always exhausting to make the trek home. This is the first time in eight years that I've made a "border run" as the term is used here in San Miguel. It might be my last.

We were busy nearly every minute. That adds to the feeling that the drive home is twice as long..........In addition, the car was packed to the roof where there was not a "body" sitting. Below is the photo of where my body was up against all manner of things (most of which were NOT mine, I might add). There were also things under our feet both for me and in the front seat. The small trunk of the car was packed to the max. Fred suggested I call this blog "Death by Ranch Style Beans" as Ron had bought more beans then I could imagine and for some reason, that one thing kept flying out of bags. Hey, you've gotta look for the humor in these experiences, don't you think? 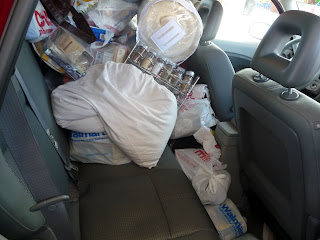 We took a different route then I usually take. I usually go up around Matehuala, around Monterrey and in through the Columbia Bridge. That route is all four lane divided highway. The route we took for this trip goes through the Sierra Madres and the City of Cuidad Victoria. It is a beautiful ride, but it is not divided highway. Luckily there is not much traffic so we made it from the border to San Miguel in exactly eight hours. Glory be.......... 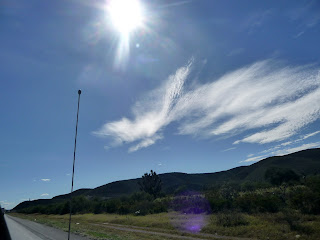 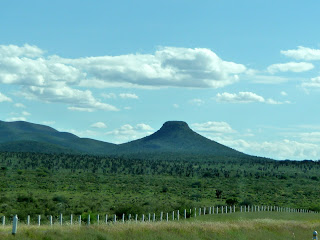 The mountain in the above photo is one of my favorite mountains in Mexico. When I see it I know it's about two hours more to San Miguel. It reminds me of the movies with The Lone Ranger and Tonto. I always hope I'm going to see a bunch of people on horses sitting up on the top ready to charge..........Everything was lush and green on this trip since the "rainy season" is just finishing.

The photo at the very top of this post are the snakeskins, venom and small birds sold by the people who live in the desert up near Matehuala. Normally I would be upset at seeing this, but, I find it amazing that in this mostly uninhabited land these people can find anything to sell.

Every now and then they'll have an animal skin or a very large bird to sell also. I call them the "snake people". A bit of the culture that hasn't changed. Except that instead of trading for goods as they did hundreds of years ago, they now sell for money. There used to be billboards up telling people not to buy these things but I didn't see the billboards this trip. The times they are a'changing.

It was fun, but I'm ALWAYS glad to be home!

I always called those people the "creepy nomad people", I had thought I has seen poverty before but they seems to have it the worst. Your heart has to go out to them.

It always seems a likely place setting for the opening of a Steven King book.

There are big billboards warning you as you approach that buying the wildlife they sell is illegal.

Sadly they have no other resourses to make use of.

Mexico is a land of great contrasts.

"It always seems a likely place setting for the opening of a Steven King book." or the start of a chapter in "the Road" by Cormac McC, a book I couldn't finish. It gave me such serious creeps.

I jumped the gun as soon as I came to your "Death by Ranch Style Beans", I figured something entirely different.......

OMG, I remember taking that road with you. Were you screaming all the way up and down the mountains? Did you start yelling "bano, bano, BANO" halfway down where there wasn't even a shoulder on the road?
Did the federales stop you? If none of the above happened, it must have been a very dull trip with no white knuckles.

I see the butterfly!

Just curious, did you "declare" the beans and other goodies on the way home? Get the red light? Or just sail on through with the bounty? And yes, that area out there with the snake skins is strange and unsettling. Glad you made it home safely in the red bomb!

Babs, this is the guy that wrote the Hooters article that you read and commented on. Thanks for leaving your comment and memory at my site. regards, bob

I always feel sad when I see those birds in their tiny cages. I heard a funny story about some bird sellers outside a church where a special service was being held in which the birds would be released. What wasn't known was that most of the released birds would fly right back to the sellers and get resold again!